It's that time of year again. Thanksgiving is right around the corner--I don't know about you but I LOVE THANKSGIVING! When I'm creating my Thanksgiving menu, I like to prepare traditional sides with a unique spin. This Sourdough, Cranberry and Pecan Dressing hits just that note. This recipe has all of the traditional components of a dressing but with a nutty, sweet and vegan twist!

Last year, my boyfriend, Gregrey and I hosted Thanksgiving dinner for his family. Gregrey's brother is vegan, so, of course, I decided to cook a full traditional Thanksgiving meal AND a full Vegan Thanksgiving meal. It was a ton of food!! BUT here's the thing, the complete shocker for me--some of the Vegan dishes were better than the traditional! I never thought in a million years vegan food would taste better than meaty, buttery deliciousness, BUT it can!

Sooo anyhoo, I made a vegan dressing and it was amazing! I know, it has sourdough, a little oil (oh, but so little) and some vegan butter..but IT IS THANKSGIVING! It's time to indulge a little...maybe not go overboard though.

What Makes this Cranberry and Pecan Dressing Special?

Alright, alright, so what make this dressing special? Well, one, it's vegan and it tasted pretty dang good to me. Two, I use some Herbs De Provence to add a unique savory and herbaceous background flavor. Three, I only used pecans as a topping so they wouldn't get mushy or soggy. I'm not much of a soggy nut fan. How about you? Four, I drizzled maple syrup on the top for a sweet maple surprise. Lastly, I topped this dressing with some pats of vegan butter and sprinkled it with Maldon finishing salt. This dressing is:

Alright, enough of the BS, let's get to the cooking part.

What you will need to make this Dressing:

Sourdough bread - I recommend sliced sourdough with a softer crust.

If you're looking for some more Thanksgiving ideas you may want to check out these recipes:

If you try this dressing recipe, I would love to know how it went for you in the comments! Have a safe and delicious Thanksgiving! Hope to see you at the next post! 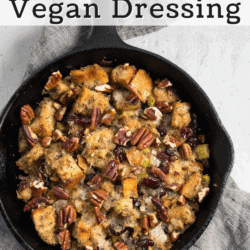 To Cook the Veggies:

Email me! If you have questions or comments, I would love to hear from you!

Nice to meet you!

I'm Suzie, a former restaurant owner and caterer. A few of my favorite things include: traveling, hiking, enjoying quality time with friends and family, and of course FOOD. 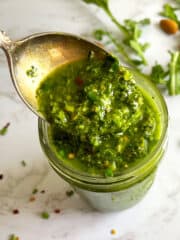 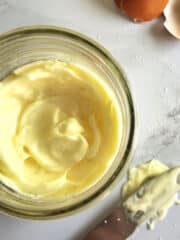 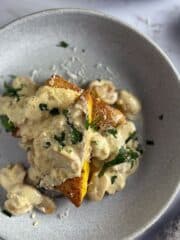 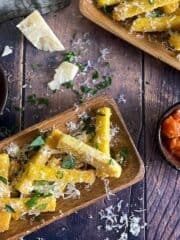 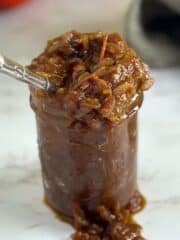 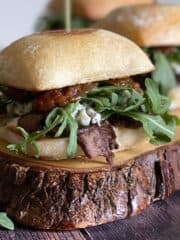